If you had told me that in 2017, I would be drinking malt liquor and playing a new game starring Sonic the Hedgehog, I wouldn’t believe you.  Furthermore, if you had told me I would be enjoying both of them, I would have called you a liar.  But as they say, time makes fools of us all. 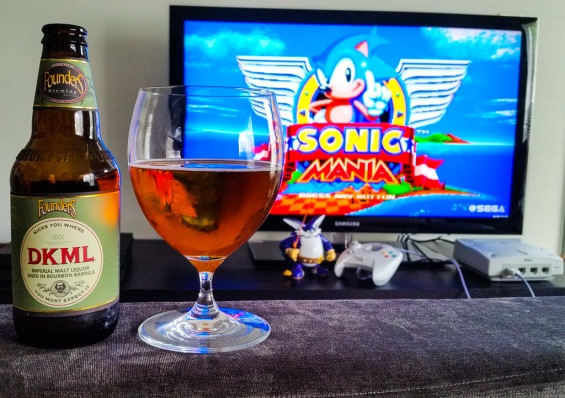 So far this year, I have made a point to seek out each of Founders Brewing Company’s Barrel-Aged Series of brews.  I generally enjoy Founders’ year-round offerings, so I wanted to make sure to scoop up these unique releases.  While the earlier beers in the series focus on generally accepted styles for aging (cherry ale, chocolate-coffee stout, imperial IPA), their latest release is a quite a kick in the pants.

DKML (I’ll let readers look up this particular acronym) is an imperial malt liquor that is dry-hopped and aged in bourbon barrels.  Typically a slighted style, malt liquor is broadly known as beer with a high alcohol content, over 6% ABV and made with malted barley.  Malt liquor is further defined by the use of corn or other adjuncts added to the malted barley to increase the total amount of fermentable sugars in the wort, which boosts the final alcohol concentration without creating a heavier or sweeter flavor. These beers tend to be mildly hopped, so they will not have a bitter taste.

Founders’ barrel-aged oddball pours a honey color with golden hues and a frothy white head. DKML has a sharp nose of bourbon, with sweet notes of cherry and cornbread. The first sip has a syrupy mouthfeel and a boozy bite, reminiscent of an Old Fashioned cocktail with (at least) double cherries in the mix.  The body is very malty, with the buttery taste of pound cake.  This brew finishes dry, with a lingering flavor of roasted corn and a hint of resin hop.

As mentioned in previous posts, I grew up in a Nintendo-centric household during the early ’90s, containing the holy trinity of NES, Super NES, and Game Boy.  But despite this lack of a Master System or Sega Genesis, I still managed to play copious amounts of the earlier games featuring Sonic the Hedgehog.  This is thanks to regular visits to my cousins’ household, where the Genesis reigned supreme.  I have so many happy memories of all eight of us children and both of our fathers surrounding the television, passing the controller back and forth to try to complete every new zone that appeared. 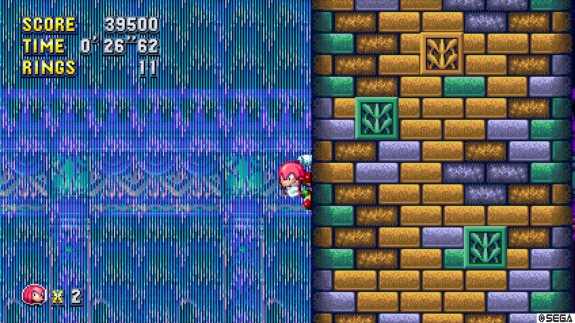 Since those halcyon days, I have dabbled in a handful of Sonic games, mainly focusing on the Adventure series that released on the Sega Dreamcast (the second console to break the Nintendo-only embargo at our childhood home).  While some of these games have fantastic moments, they fail to capture the fluid gameplay and joyful presentation of the Genesis-era titles.  Over time, I completely abandoned playing any new games from the Sonic series, assuming that there would not be a return to good form for the Blue Blur. Fortunately, I was proven quite wrong.

The recently-released Sonic Mania is generally billed as a direct sequel to Sonic & Knuckles, as made evident in the well-animated opening for the game.  Development teams PagodaWest Games and Headcannon, along with director Christian “Taxman” Whitehead, all made their initial marks creating well-received ROM hacks and original content featuring Sonic the Hedgehog, so it make sense that these creators would produce such a loving tribute to the early days of The Fastest Thing Alive™. 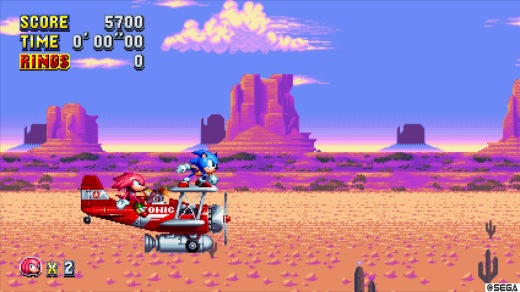 Sonic Mania looks, sounds, and plays like an idealized version of the games of Genesis past.  The spritework is quite impressive for Sonic, Tails, and Knuckles, with each of the heroes being as expressive as ever.  The levels are well-designed, featuring a mix of new areas and throwback zones from each of the four Genesis-era games.  The soundtrack is absolutely fantastic, featuring the work of composer Tee Lopes, who has a history of creating Sonic music remixes.  The tracks for classic Sonic levels have been well arranged, while the songs for new zones sit comfortably alongside the outstanding pop music work of Masato Nakamura.  Overall, Sonic Mania feels in the same vein as Shovel Knight, as a new game that took some of the best lessons from its source material. 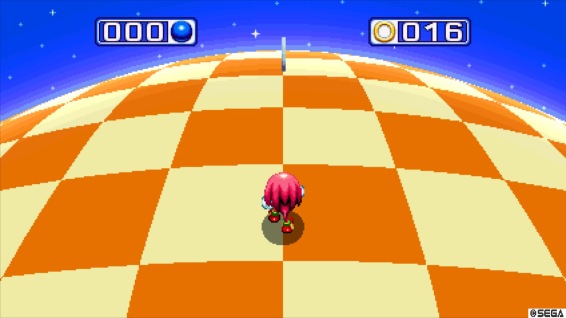 My only complaints against Sonic Mania would be related to my preferences for classic levels and my lack of skill at the bonus stages of old.  I encountered choke points during my playthrough, specifically with rearrangements of previous areas for which I have no love (looking at you Oil Ocean Zone and Lava Reef Zone).  Additionally, I struggled to complete any of the checkpoint bonus stages, which are a mimic of the bonus stages from Sonic 3.  I would have much preferred to see the bonus stages from Sonic 2 make a resurgence, along with the Mystic Cave and Casino Night zones from the same title (although the new Studiopolis Zone is a fantastic tribute to the flashier areas of earlier Sonic games). 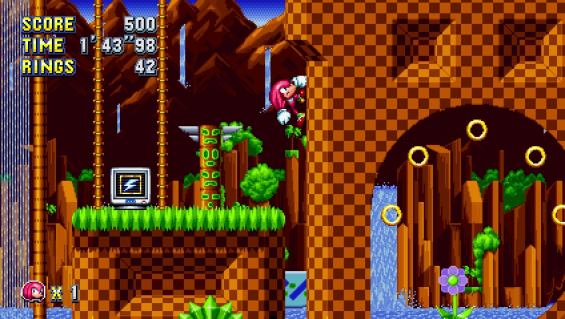 Minor complaints aside, Sonic Mania is an excellent throwback to the glory days of Sonic the Hedgehog and a fantastic new game that provides an example of well-planned retro game design.  If you have even an inkling of love for the Blue Blur (or a device that supports Sonic Mania), I would recommend this game for your enjoyment.

You may have noticed earlier in this post that there is a link to a purchasing page for Sonic Mania.  That link (along with the one directly above) is an affiliate link to help maintain the costs of running this site.  I would definitely recommend Sonic Mania to anyone who loves the Sonic games of old, or for those who are looking for a great modern representation of the Sega Genesis era games.

Clicking through the affiliate link will direct you to the Amazon page for the specific product, but you can support Digital Draughts by purchasing ANYTHING on Amazon using these links.  Just click through the link above and buy any items, which will provide support to keep Digital Draughts chugging along!  Many thanks and happy hunting!

One thought on “Weekly Brews and Reviews: Sonic Mania, It Works Every Time”